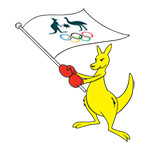 We love when there are two sets of good news in one, and this recent update is exactly that.

With that being said, the new online lottery is just in the proposal phase, not yet set in action and may well be rejected.

The idea and the mission of John Wylie, head of the Australian Sports Commission, are clear. Australia’s Olympic teams have been outperformed consistently in recent years, and with the consistent onslaught of funding being cut, there doesn’t seem to be a medal in sight. While the teams still do well, their domination has become one for the history books rather than something we can look forward to.

Wylie is pushing to change that by funding Olympic dreams by commissioning an online lottery, the proceeds from which would go toward new complexes, training equipment, the general awareness raising of being more active in Olympic sports at the beginner level, among other relevant goals.

We all know how the Australian government responds to new gambling outlets. If anything, they have had a reputation for cutting and limiting them, especially when it comes to online play. From the ban on being able to place bets in-play (while the game is going on), to not allowing online casinos based in Australia to advertise to Australians, I would say the prospect for John Wylie — and in turn, a new sun on the horizon for Australian Olympic hopes — seem a bit slim, though certainly not misguided, especially from the perspective of online gaming lovers.

This whole idea has been directly inspired by the UK, who have, since the middle of the 1990s, began funding their athletes with proceeds from the lottery. In fact, the UK first introduced the lottery then, never having it before, and it not only became a hit, it helped fund their athletic endeavours.

Since Australian Olympic funding has dropped and the UK funding has risen, the success rate has become very apparent. The former has seen a drop in their gold takeaways, consistently coming in sixth most medals and even lower, while the UK has seen a rise in their medal takeaways, which started almost immediately after the lottery helped fund their efforts.

As with anything that comes to gambling, the odds aren’t on the players side. As previously stated, the Australian government is more than hesitant when it comes to increasing gambling outlets. With the convenience and ease of buying a lottery ticket from your computer, it would be easy to argue that it would encourage problem gambling.

With that being said, it does seem like morality is on the side of the Australian Sports Commission and John Wylie, who have made it clear that their motivation lies in helping athletics and the society’s love for being active as a whole.

And let’s be honest, it’s a lot more fun to bet on the Olympics when your country has the best shot of paying out. Is there anything better than that in sports betting? I think not.

Written for Onlinecasino-Australia.com by Martin Jones - Published on 08-12-2016