Starburst is so excitingly filled with lights, sounds, colours, and action, it’s no wonder we consistently see it pop up time and time again as a favourite. It really does feel like anyone who has been active in the online Pokies scene for just a month will have heard of this industry staple, and for good reason. From the look and feel to the winning potential and special features, and given the fact that it’s designed by one of the best and most accessible online casino software designer in the world, it’s no wonder few games can compete with its popularity. 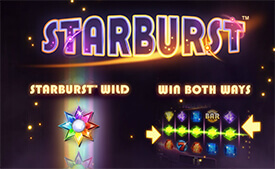 We can’t mention the Starburst slot machine without giving a quick overview of the craftsmanship of their software designer, Net Entertainment. Founded in 1996, they have consistently been an industry leader in design, innovation, accessibility, and unique ways for bettors, whether in Australia or anywhere else in the world, to place bets online. With over 200 games in over 100 online casinos; numerous EGR, Global Gaming, and IGA awards; and a stellar reputation among players, experts, and fellow software development companies alike, Net Entertainment is at the top of the pile, and Starburst is arguably their flagship product. Since they’re one of the most prominent forces, you’ll find their games, and Starburst in particular, at numerous casinos, from Net Entertainment specific sites to sites who host various software companies’ products.

Starburst has a nice balance of depth and approachability, with five reels and 10 paylines. Players are immediately taken by the vivid and immersive graphics, animation, and sound effects, where things spin and flash even when the reels are still. Visually, it’s captivating, but unlike other games with comparable distractions, the bells and whistles actually don’t cover up any inferiority, because Starburst could be a barebones, black and white game, and the winning potential would still be highly recommended. The coin values range from $0.01 up to $1, so the minimum total bet is just $0.01, and the highest is $10, which can be particularly good for players playing on a budget. It’s always important to note that Pokies almost always have one of the highest house edges in the casino, so betting $100 per spin will add up very quickly if you have even a mild losing streak. Set the number of lines you want to play (always play the max, and lower the coin value accordingly to be within your budget), press spin, and get ready for some exciting twists and turns. 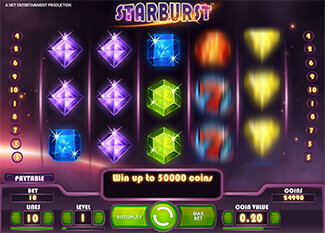 The Starburst Wild symbols are actually famously enticing to Slots players who’ve come across this gem of an option. They appear on the second, third, and fourth reels and can take the place of any other symbol to create winning combinations. When a Wild symbol stops on a reel, it suddenly takes up the entire reel, and the other reels spin again! If another Wild comes up on the re-spin, it takes up its reel, and the rest of the reels spin a third time, and so on. Needless to say, the winning potential is insane with those wild symbols.

Lining up five gold bars results in the highest Jackpot of 250 coins. Not as high as most other Pokies, but the return to player (RTP) of Starburst makes up for it in long term winnings.

Starburst does not feature a Progressive Jackpot, but instead has the fixed jackpot of 250 coins. For players who like going for the one in a millions (and millions) chance Progressive Jackpots, this is not for them. Starburst is basically the Blackjack of the Slots world, so for the Australian online casino community, it’s definitely dependent on personal preference, though that applies to every gaming option no matter how much we personally like it here at your #1 source for all things Aussie online gaming. The Wild symbols progression is as close to a bonus game as Starburst has too, so if you really want all the bells and whistles, like Bonus Games, Progressive Jackpots, and Scatter symbols, Net Entertainment has plenty of options that fit that mould.